Massachusetts commercial real estate currently presents a competitive and vibrant foundation for real estate investors to generate positive financial benefits. Massachusetts (MA), officially referred to as the Commonwealth of Massachusetts, may be one of the smallest states by area: 44th in the nation, but it is also one of the most populated: 15th overall. As one of the original 13 colonies within the United States of America, it is not only rich in culture, but also dynamic demographically and economically.

When it comes to economy, it is ranked 10th nationwide in terms of GDP and 31st compared to all states and sovereign nations. Additionally, Massachusetts plays an integral part in the cultural, educational, technological, and scientific development of this country.

In fact, U.S. News & World Report currently ranks Massachusetts #8 in the nation overall, with healthcare, education, and economy as the highest ranking / most important contributing factors. Furthermore, The Milken Institute, an independent economic think tank based in Santa Monica, California, recently ranked MA as the #1 state for Science & Technology.

Science and technology companies are major contributors to the booming commercial real estate market in the state, especially in Boston, as biomedical & pharmaceutical firms jockey for the precious spaces that are competitively available in the Boston area.  View the Boston industrial commercial real estate market quarterly reports & gather more information about the biomedical industry in Beantown.

We’ve compiled the 4 primary reasons that illustrate why Massachusetts is an ideal place with ample opportunities for commercial real estate investors to consider parking their capital for growth. The reasons include: Massachusetts’ economy, population growth, education, and health care. 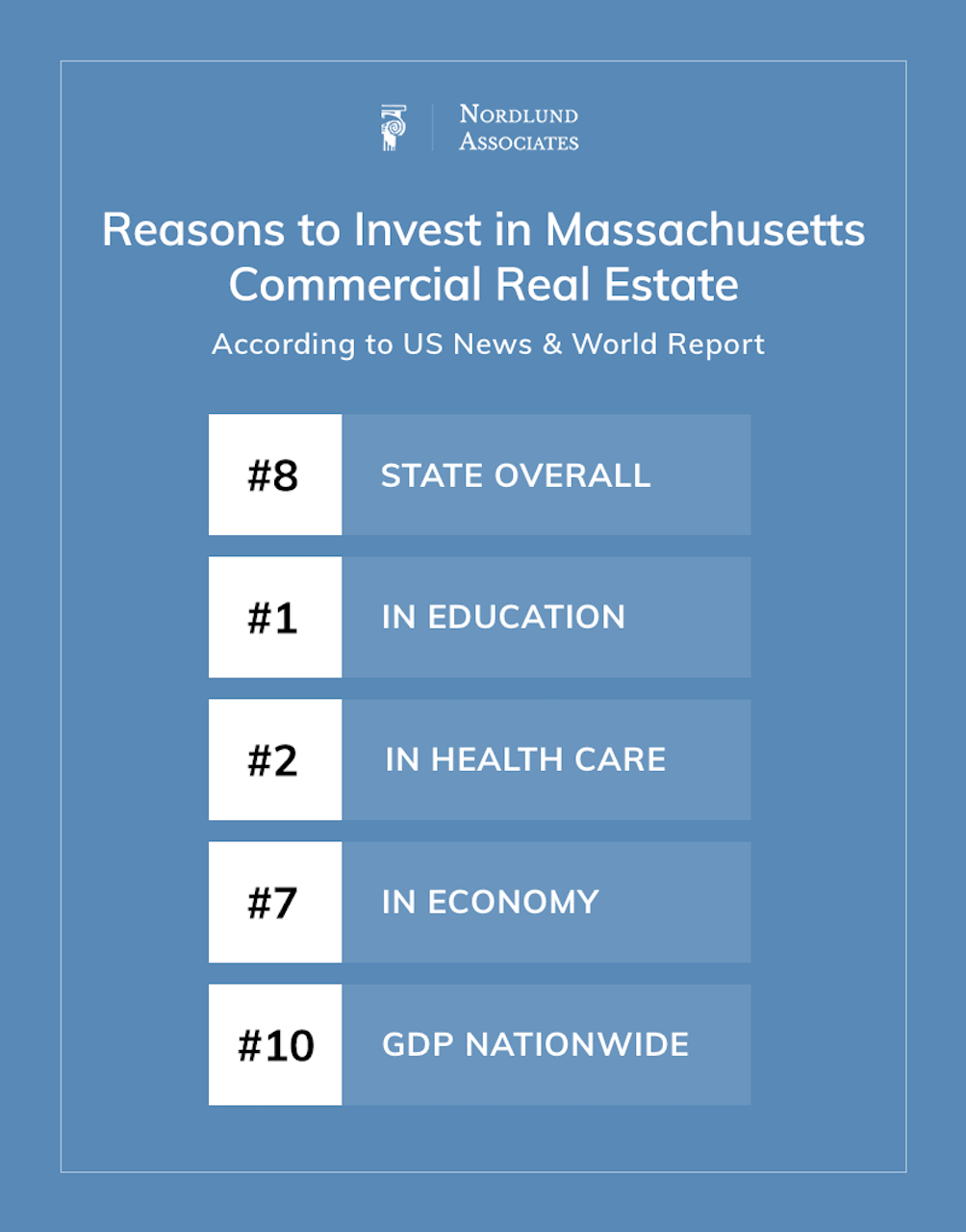 4 Reasons to Invest in Massachusetts CRE

Following the evolution of many modern economies, Massachusetts moved from a more manufacturing-based economy to a trade and service-based economy over the last century. However, some of the primary industries within the state’s economy are computer / electronic equipment, industrial machinery, printing, chemical and metal fabrication.

US News & World Report currently ranks MA’s economy #7 nationwide. Additionally, as previously mentioned, MA is 10th in the United States for Gross Domestic Product, and 31st in the world when compared to other states in the country and nations around the world. In 2018, Massachusetts recorded $575,635,000,000 ($575.6 Billion) for GDP. To put things into perspective, Massachusetts’ GDP is greater than the GDP produced in Sweden, Poland, and Belgium.

Furthermore, the economy of a state is only as great as the income of its people. According to USA Today, in 2018 Massachusetts ranked #4 in terms of household income nationwide with a median of $77,385. It’s not rocket science, but it’s important to state that a populous that earns good money can then contribute to the economy with everyday spending, investments (in commercial real estate or otherwise), and business opportunities.

Population growth is an important indication of a state’s economic and overall health, as it illustrates the desire that people have to live in a certain location. It also shows that there are opportunities, as most people cross state / international borders in order to secure a better future.

Having said that, Massachusetts’ population currently stands just shy of 7 million residents (6,939,373). It is also 15th in the nation for population growth as of 2019, with an increase of .54% year-over-year.

This population growth was most prominent in Boston, as it grew 10% from 2010 to 2017; however, the whole state has seen steady growth with 82% of communities reporting an increase in their populations over this time. Consistent population growth across the state has led to increased opportunities for competitive, high-paying jobs and a sound foundation for promoting personal and professional growth. 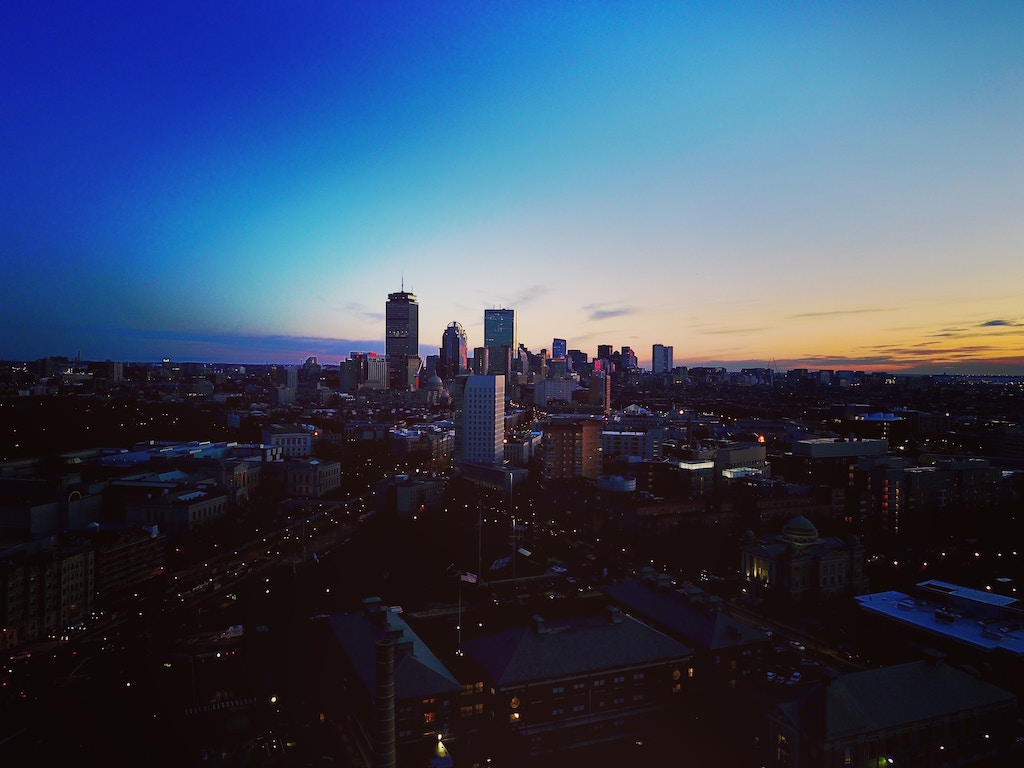 Not only is Massachusetts’ population growing steadily, but its population is among the most educated per capita in the nation. 1 in 5 of Boston’s residents alone have a graduate or professional degree, while the national average is around 13%.

US News & World Report ranks Massachusetts #1 for education in the United States. To state the obvious, you can’t get much better than that. In fact, you can’t get any better. For Higher Education, MA ranks #27, but for K – 12 Education, MA is #1. That is where the foundational elements of education and learning is established after all.

According to the US News & World Report site, 7 out of the 10 states ranked in the Top-10 for education also rank in the Top-10 Overall, so education is a fundamental quality of a successful state / community.

The most prestigious colleges in Massachusetts that are known throughout the country and around the world are Harvard, Massachusetts Institute of Technology (MIT), UMass, Boston College, Boston University, Northeastern, and Tufts. These are just a few of the prominent educational institutes in the state.

While healthcare may not be a direct indicator for the decision-making of commercial real estate investors, a state that has a strong foundation taking care of its citizens shows signs of being advanced as far as the overall welfare. Massachusetts ranks 2nd in the nation for healthcare with health care access and public health being the primary contributors to this outstanding ranking.

Additionally, only 3.9% of the citizens in Massachusetts are uninsured, while the national average sits at 13.8%. These factors highlight the quality of life people have in the state.

Essentially, the primary factors illustrated in this whole article (economy, education, population, and healthcare) are a reflection of the fundamental factors that drive a community’s connectivity, expansion, and advancement. Massachusetts (especially Boston) provide a sound base for investments, as people in the state are not only healthier than the national average, but also more educated and comparatively making competitive wages that contribute to the overall economic circulation and value within the state.