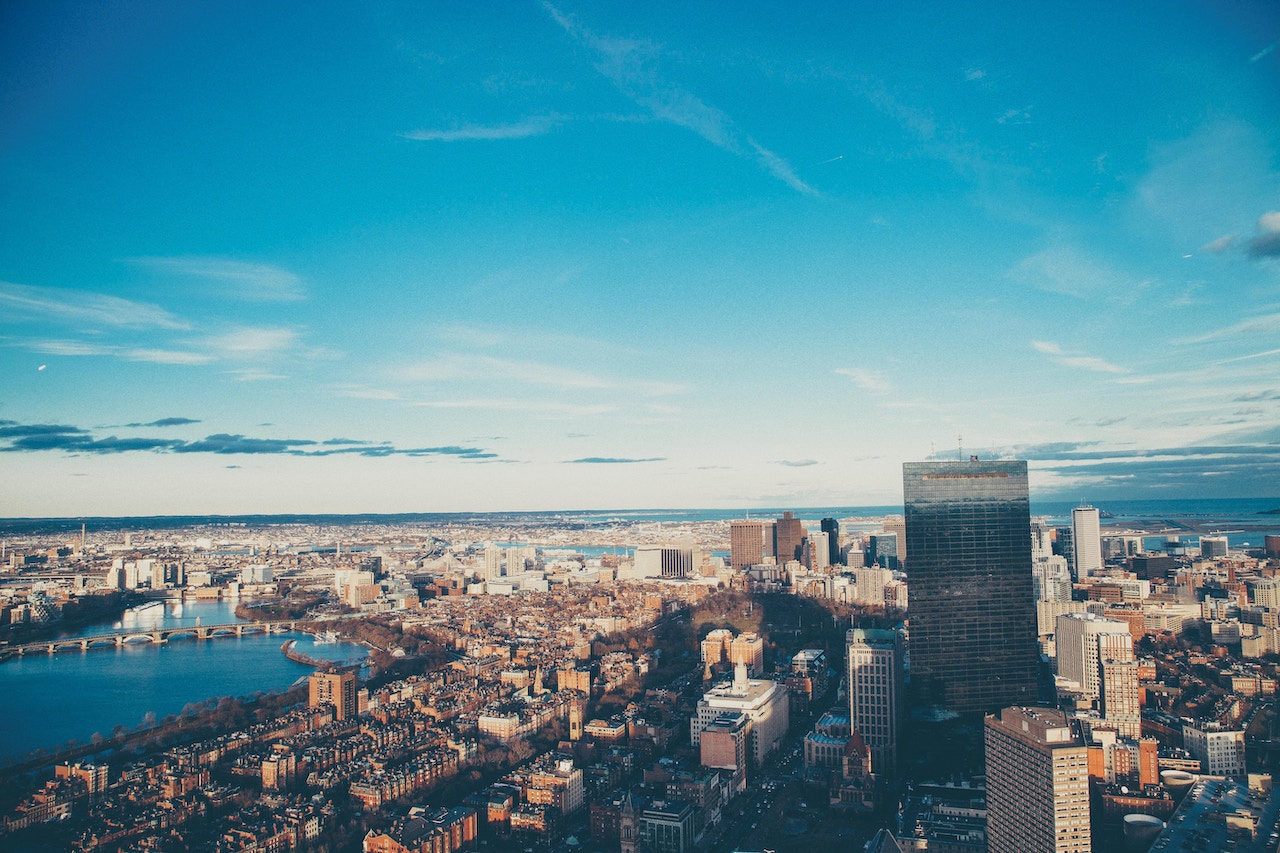 According to US News & World Report, Boston is the 7th ranked economy of the 50 states currently. This illustrates the robust fiscal situation of the state compared to others in the nation. It provides fertile soil for companies and innovation to grow and contribute to the economy on a regional and national level.

Furthermore, in July 2019, the economy in the United States will begin the longest consecutive streak of expansion since the crash in 2007 / 2008. This is considered the longest economic growth period in history, and naturally experts are speculating that there will be a slowdown in the near future. One of the primary indicators of an economy’s health is unemployment.

Boston is slightly better than the national average of 3.8% with 2.9% unemployment currently. This is a solid indication that the economy is not only stable, but growing, as it is continuing to drop versus one year ago where unemployment was 3.3% in the Boston area.

Between the data for Boston’s economy and Boston’s office market (below), the current office real estate stats and economic market snapshot are very positive. Boston’s office market has a vacancy rate of 5.9%, for example, which is nearly one percent lower than it was the previous year (6.8%). Additionally, the vacancy rate is nearly half the average of the Greater Boston Area, which is currently at 10% overall.

While economists and commercial real estate experts thought the Boston commercial real estate office market could not get better than the past few quarters, it appears the apex has not been reached yet. As previously mentioned, Boston office vacancy levels have dropped nearly 1% since last year from 6.8% in 2018 to 5.9% currently. At the same time, Boston’s office rental prices raised nearly 17% from $56.32 in 2018 to $65.72 in 2019. 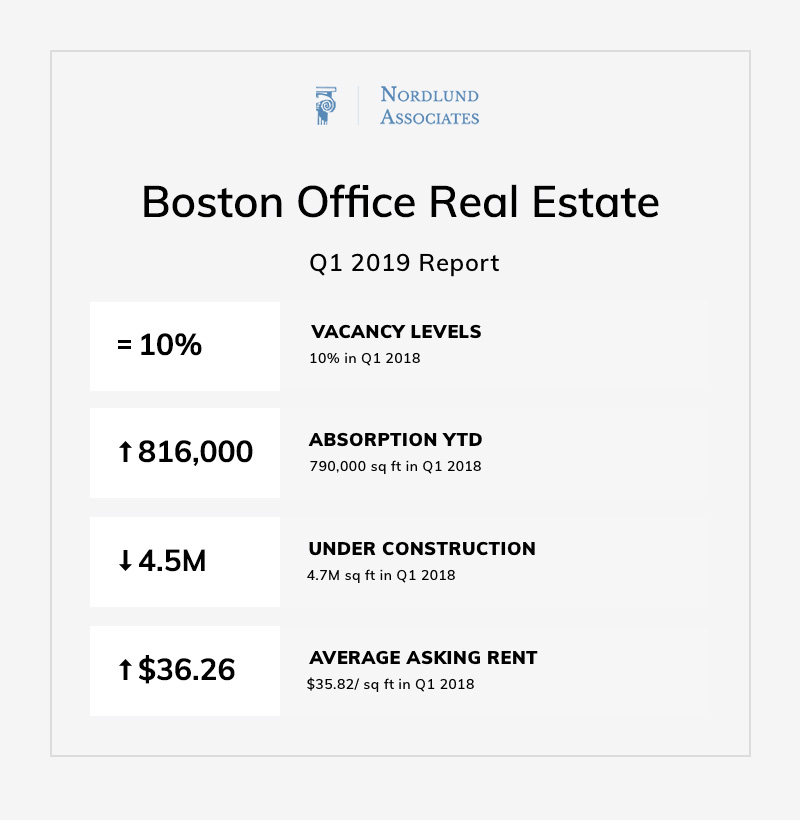 A quick comparison of office vacancy rates in North Shore compared to Greater Boston reveals little to no difference: 10.7% vs 10% respectively. However, North Shore is slightly better when compared to Boston’s Suburban market: 10.7% (North Shore) vs 13.7% (Boston Suburbs).

In contrast, the average asking rent for office space in North Shore Massachusetts is slightly less than the average Suburban Boston asking rent: $22.17 vs $25.60, respectively. While there are some differences in the figures, North Shore appears to be a good barometer for the general state of the office real estate market in the region. 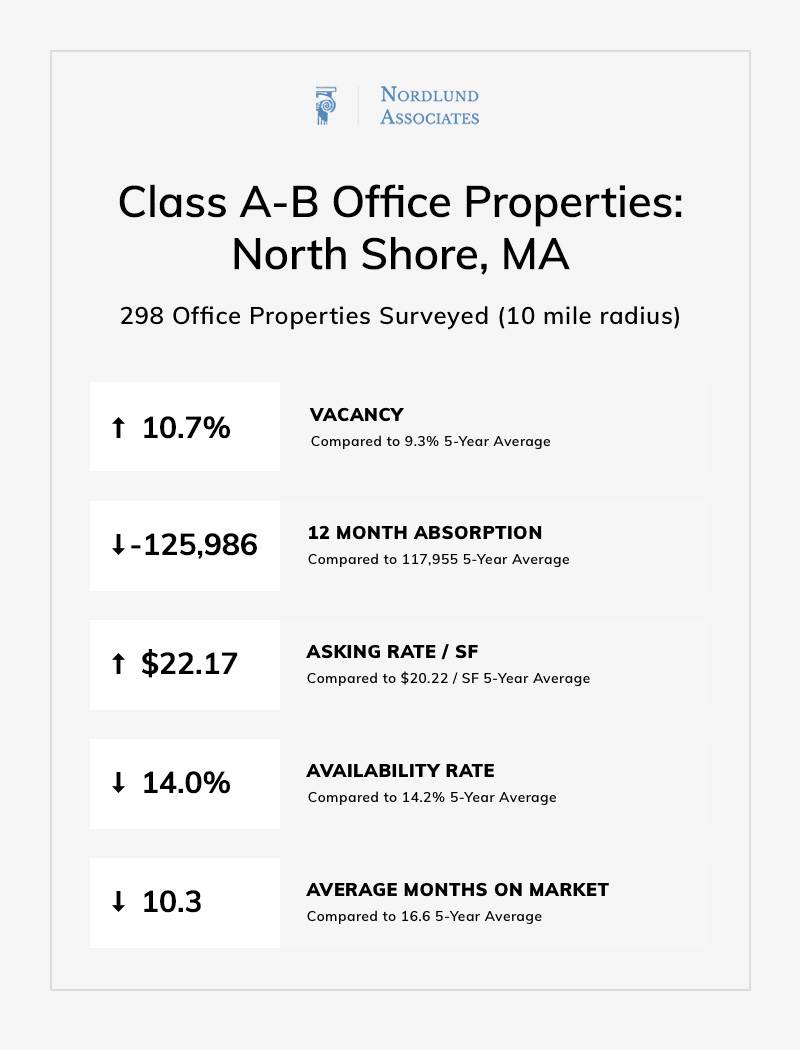